A465 Section 2, Gilwern to Brynmawr

The A465, or Heads of the Valleys road, is one of the Welsh Government’s key strategic corridors and an international gateway for the South Wales economy, connecting the M4 at Neath to Abergavenny and Hereford. It provides links between West Wales and the Midlands, and into the northern valleys, supporting regeneration in these communities. 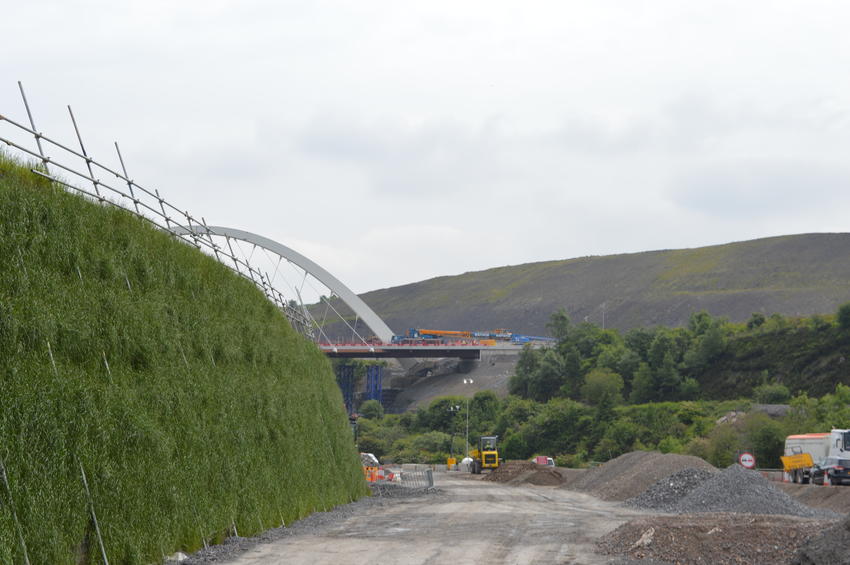 The existing A465, a single three lane carriageway, was built in the 1960s with two lanes in the uphill direction. A study in the 1990s identified that improvement of the A465 was critical to the social and economic regeneration of the Heads of the Valleys area, providing access to key services, jobs and markets together with supporting inward investment to areas such as the Ebbw Vale Enterprise Zone.

Costain Limited are currently undertaking Section 2 of these works which runs for 8KM from Gilwern in the east to Brynmawr in the west.

The Project Team for the design and build of Section 2 consists of Costain Limited, Atkins, Ch2M and RPS, with the groundworks being undertaken by Walters Group Limited. The initial overall project value was estimated at circa £220m, with completion scheduled for late 2019.

Due to the local topography, the requirement for cutting into and extending existing embankments and side slopes was considerable. Reinforced soil slopes and structures, retaining walls and soil nailing are all solutions widely used to facilitate the widening of existing new carriageways. On this project all of these solutions were utilised at various locations.

The fact that these works were taking place next to a live carriageway, with limited opportunities for road closures, meant that effective planning and programming of the works was essential. Disruption to road users, although inevitable, had to be kept to a minimum, with regular updates given on the works taking place.

Phi Group, part of the Keller group of companies, were first approached late in 2011 to provide early design advice regarding the various structures and most appropriate solutions to overcome these significant geotechnical challenges. The Project Team appreciated from an early stage that input from a specialist geotechnical contractor to create a truly collaborative environment thereby enabling solutions that were engineered, cost effective and safe to construct would be invaluable. The concerns and requirements of all parties involved were considered and taken into account from the outset.

Following this initial period, Phi Group were contracted to design a number of reinforced soil slopes using their Textomur system, utilising site won engineered fills wherever possible. During this phase, Derek Mulenga of Phi Group, co-located with Atkins/Ch2M offices in Cardiff developing, designing and refining these Textomur reinforced soil slopes. This early specialist appointment and integrated team approach enabled issues to be identified and solved at an early stage meaning that when works commenced on site a more complete solution was already in place, rather than having to deal with issues during the construction stage with potentially costly delays.

The use of reinforced soil through the Textomur system was quickly identified as the most cost effective solution to the embankments widenings. Textomur installed at angles from 60-70 degrees, involves the use of steel mesh facing cages and geogrid reinforcement with, in this case, the Maccaferri Paragrid product as the reinforcement and locally sourced stone compacted in layers around the Paragrid to form the reinforced soil mass.

As with all Keller’s projects, the most important priority for everyone on site is ensuring the work is carried out safely.  The collaborative approach of the Project Team, that enabled the design process to run smoothly has of course to continue during the construction stage, especially given that the existing highway remains open with the usual logistical problems and additionally that Phi Group are working in several locations concurrently with up to 45 operatives and multiple plant gangs.

Phi Group’s Works Manger Jamie Knill, through integration with the project team of Costain Limited, Walters Group Limited and other trades ensures the necessary co-ordination, with delivery of materials planned as far in advance as possible and stockpiling to ensure productivity. The programme demands that multiple trades need to be in the same area of the works, so essential pre-planning, discussion and compromise prevents issues with contractors delaying one another.

Phi Group’s Managing Director Julian Fletcher says ”It is great to be involved on this scheme working for Costain and the Design Joint Venture. From a very early involvement over five years ago both of these parties have worked in a true collaborative way drawing on our 25 years of experience for the betterment of the project with respect to design and the practicalities of installation of structures with extremely challenging access and time constraints. It is great to have over 40 site personnel on site installing numerous retaining walls in many locations concurrently as it shows what Phi Group can resource to meet the Clients requirements.”

Aside from the work that Phi Group are undertaking, Section 2 involves a huge amount of civils work. There are 2 major over bridges, 5 footbridges, numerous major service diversions, including diversion work to two high pressure gas mains and a pumped sewer that required a new 1.5m diameter, 100m long tunnel, at a depth of 20m below the surface. The treatment of a number of old mine workings uncovered near the Brynmawr junction was also required.

The work that Phi Group have undertaken on site is very impressive, with work starting in March 2017 and programmed to continue well into 2019. 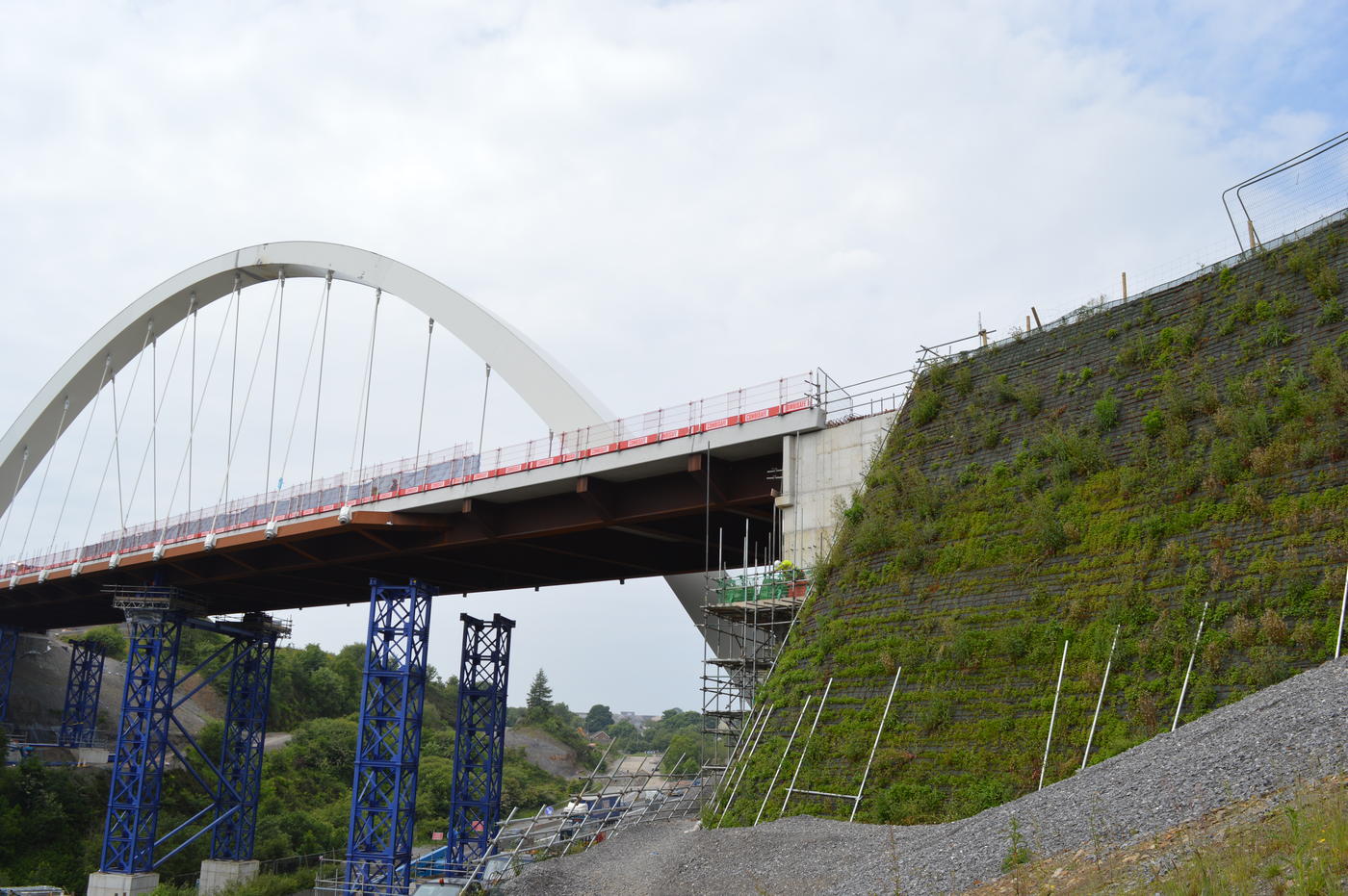 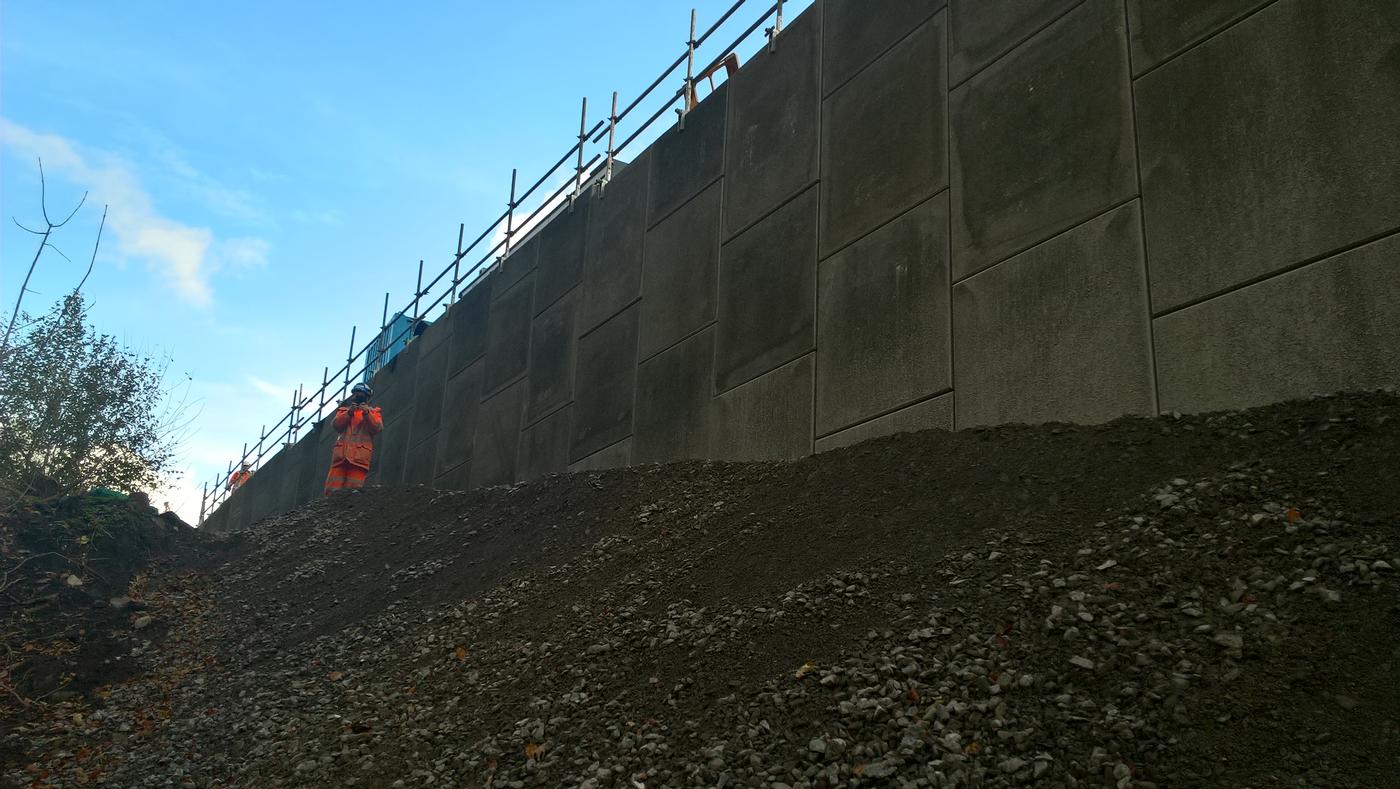 A465 Heads of the Valley project