Daventry International Rail Freight Terminal was to be the home of a new distribution warehouse for Sainsbury's supermarkets. 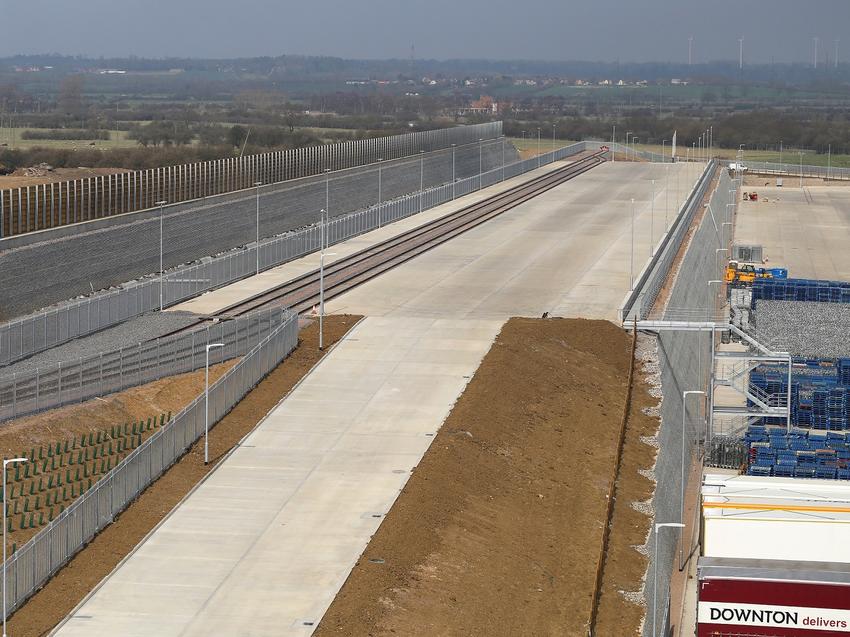 VolkerFitzpatrick are the Principal Contractor responsible for the delivery of one of the largest distribution warehouses in the UK, at over 1,000,000 m3, for Prologis. The warehouse will then be leased by J Sainsbury plc. This large project not only involves the construction of the warehouse and associated facilities, but also the installation of a new railhead to serve the warehouse. As can be seen from the picture below, the existing railhead terminates at the Tesco distribution warehouse on the other side of the busy A428.

To facilitate the installation of the new railhead, a new bridge across the A428 would be required. The governing factor for the project and particularly the new railhead, was that existing ground levels were some 9.0m lower than they needed to be. This would involve the design and installation of a bund to raise levels whilst also accommodating the new rail head and heavily loaded RC slab that would be used for the unloading of containers from the trains. This RC slab would have to support heavy loadings from the reach stacking machines and HGV traffic.

Beyond the new railhead a further 5.0m bund was required to completely screen the site from future residential developments. At an overall height of 14.0m and length of 800m, space constraints on site meant that there was not enough room available within the development footprint for a free standing bund with shallow self-supporting slope angles.

The site of the new warehouse was 9.0m lower than the adjacent site where the rail head terminated. To bring the new rail head in would therefore mean raising levels on site. From early discussions it was clear the ability to re-use site won material to raise levels was crucial to the scheme’s success. The material on site, a Lias clay, was not ideal to use and compact, but Phi Group designed a solution.

VolkerFitzpatrick quickly realised that the construction of such an engineered structure firmly lay within the remit of a specialist such as Phi Group, Keller Limited’s specialist retaining structures division. Although the project star ted on site in December 2013, discussions star ted between Phi Group and VolkerFitzpatrick as far back as early 2012. The bund was originally designed as a vertical reinforced earth structure with a concrete panel facing. Phi Group design and install such systems but quickly identified that this would have required the importing of vast quantities of granular material to form the reinforced soil block, whilst also increasing the amount of material that would have to be removed from site.

Through discussions with VolkerFitzpatrick, Phi Group quickly realised that the key aspect of making the project viable from an economic perspective, was forming the bund using material won from site excavations, thus limiting importing of material and car t away costs. The material on site was mostly over-consolidated medium to high plasticity Lias CLAY material. This material typically has low phi values, high moisture content and high plasticity. This makes it largely unsuitable for use as reinforced soil fill material. When considering whether site won material can be used within reinforced earth designs, additional testing is recommended. Moisture content and ability to compact the material adequately are very important.

To make the site won Lias CLAY suitable for use within the reinforced soil bund, Phi Group and VolkerFitzpatrick proposed the use of Lime Stabilisation techniques to improve the parameters of the Lias CLAY. Lime is introduced to the CLAY material on site and mixed by using large rotovators. The introduction of the Lime reduces the moisture content of the CLAY material and improves it strength characteristics. This makes it both better from a design perspective, but also makes it easier to work with and compact. This is essential in the design and installation of reinforced soil structures as the material is compacted in layers around the geogrid reinforcement. VolkerFitzpatrick used an adjacent field as their treatment area, where the excavated material was prepared. The material was then delivered to our working area for use within the bund. Prior to this Lime stabilised material being delivered to us, Ground Granulated Blast Furnace Slag (GGBS) was also added to the material. This acts as a cement substitute and hardens the material further. It acts slowly, but does mean that once it is added the treated material has to be used within 72 hours.

The success of the project was very much dependent on this lime stabilised material being treated and delivered to us in sufficient quantities for us to meet the agreed programme. At full speed we were able to place and compact up to 5,000m3 of this material per week. Each layer of this material was tested for moisture content and compaction to ensure quality was maintained. Both the treatment and use of this lime stabilised material is very weather dependent. If rain was expected then there was no use in treating the material as when it gets wet it reverts back to its original state.

As the lime stabilisation increased the pH level significantly, a geogrid that was capable of withstanding these high pH levels was required. In the short term the pH levels were increased to 12.5, but reduced to 11 after just 48 hours. At maximum height the length of the geogrid reinforcement extended 13m from the face of the Textomur structure. The length of the geogrid reinforcement is determined by loadings, foundation soils, retained height and the characteristics of the material to be used as the reinforced soil fill. In addition to the 70° Textomur Intermodal and Railway walls, Phi also installed several other retaining structures on site. There are 4 no. concrete panel reinforced earth structures acting as wing walls for the bridge abutments of the new railway bridge over the A428. These concrete panel faced structures used polymer straps for the reinforcing elements.

Almost 3,000m2 of wraparound reinforced earth embankment (landscape Wall) was installed on site on the west side on the new bund. This was to create a vegetated green face to screen the site from new developments on the adjacent land. Again, the same re-engineered fill material was used. Finally we designed, supplied and installed one of our Andacrib concrete crib retaining walls. This wall is supporting the new staff car park. Staff will enter the new warehouse via a link bridge. The Andacrib system has a design life of 120 years and is designed to EC7 & EC2. Quick to construct and maintenance free, the system is far more cost effective compared to traditional retaining walls. 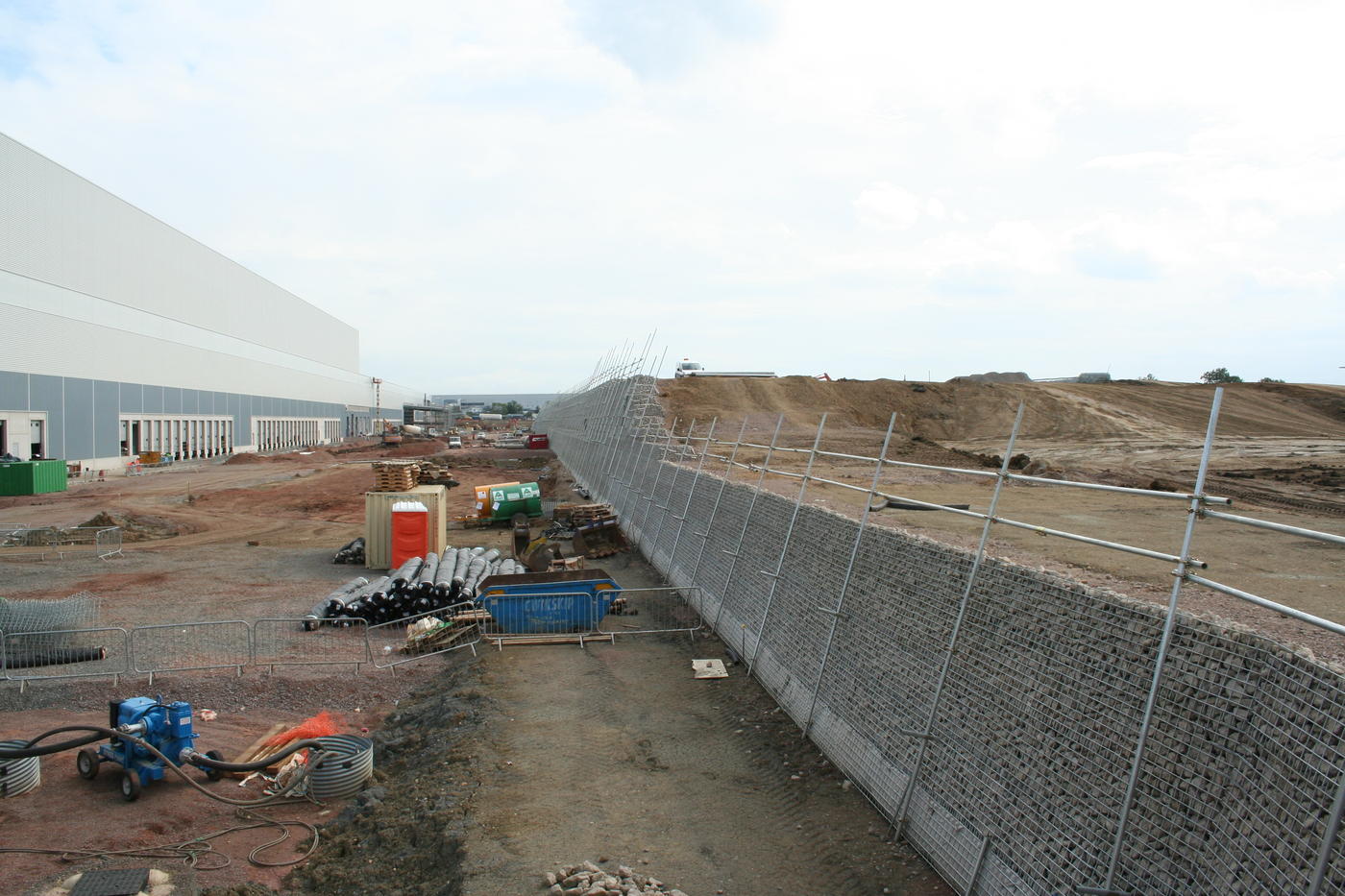 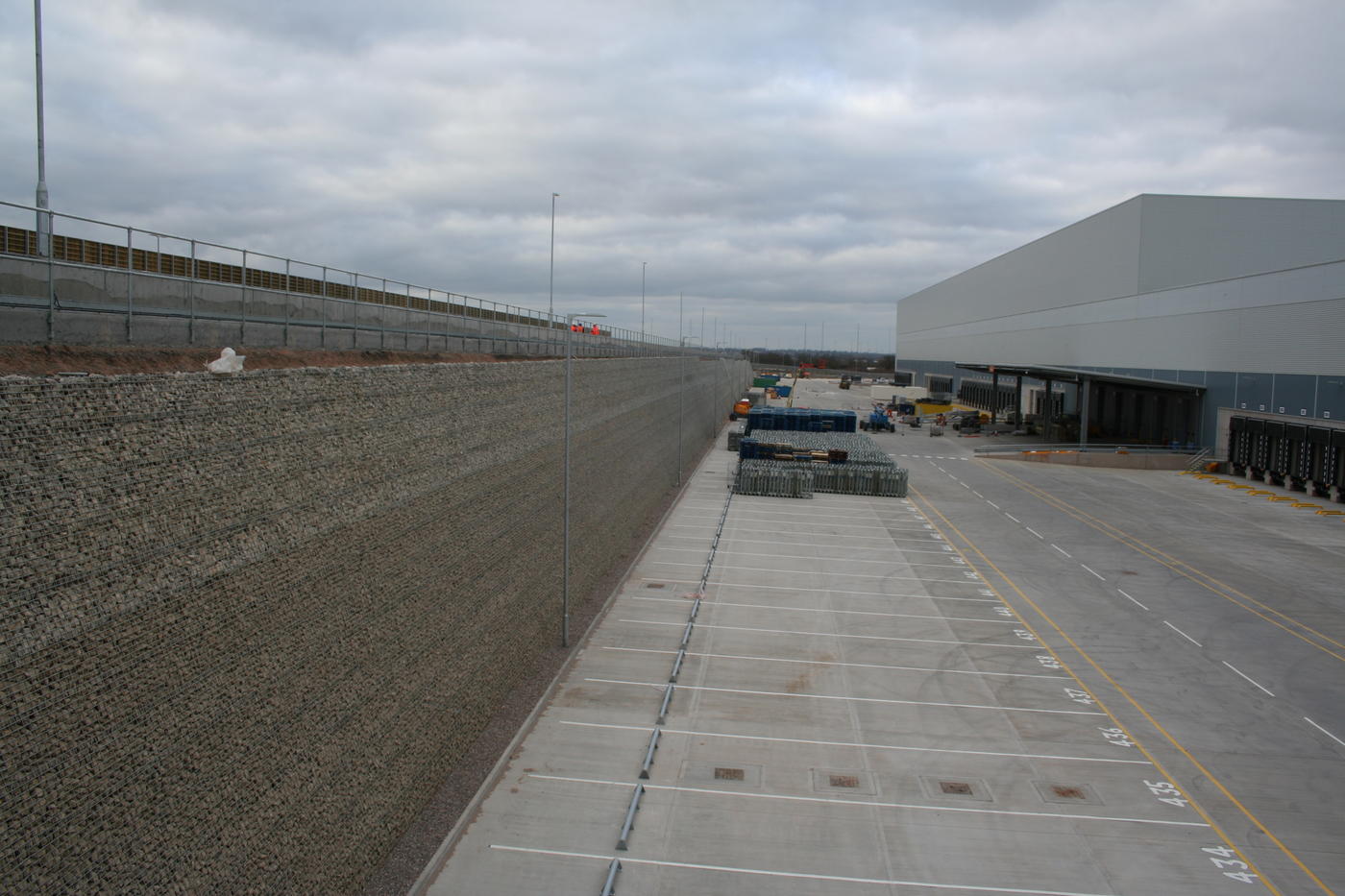 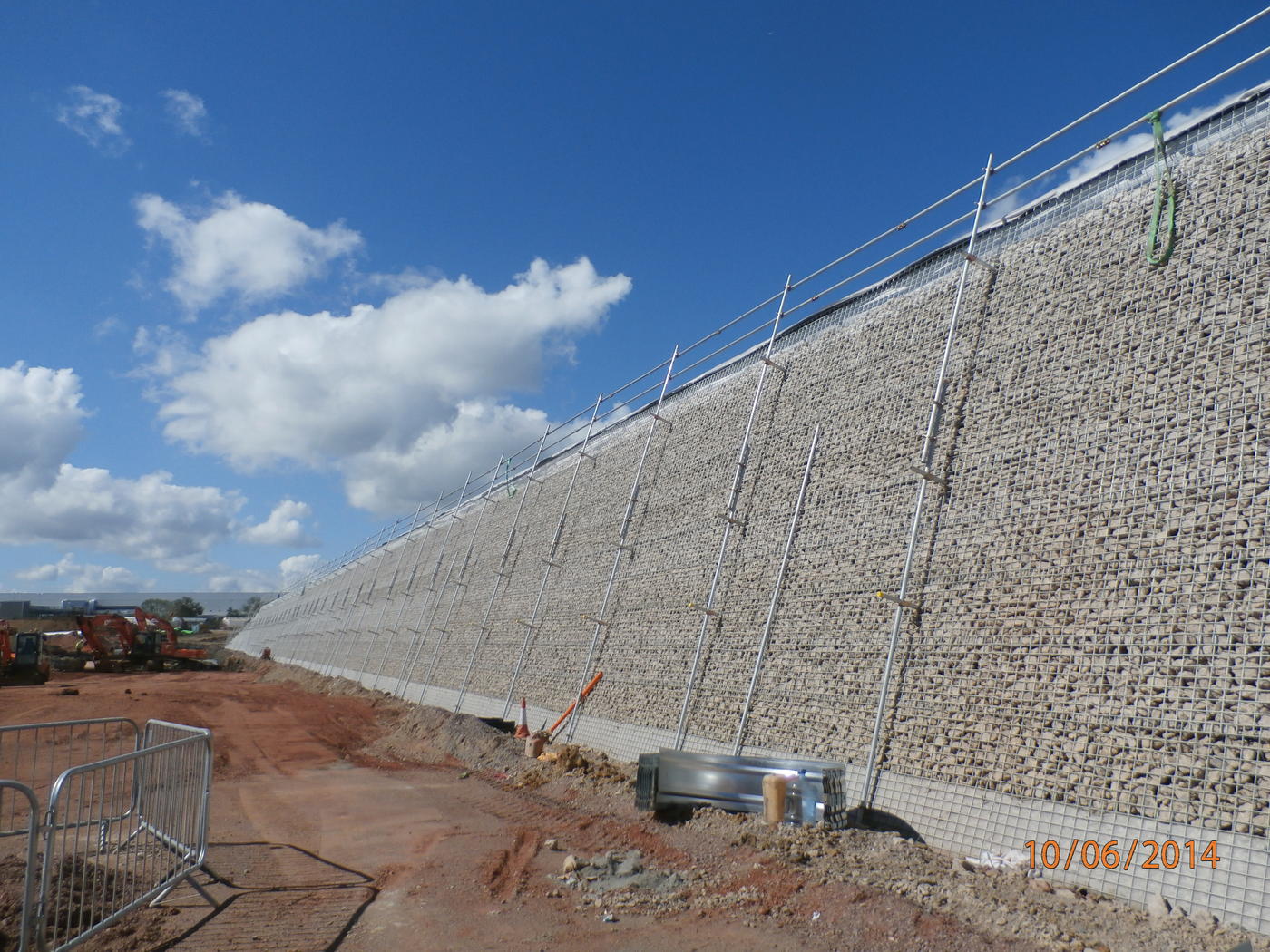 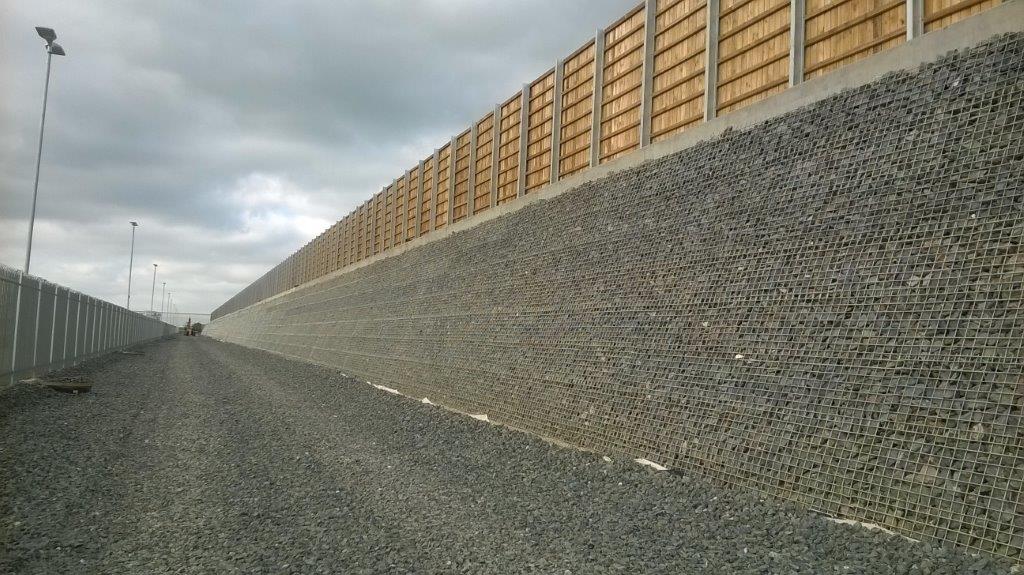 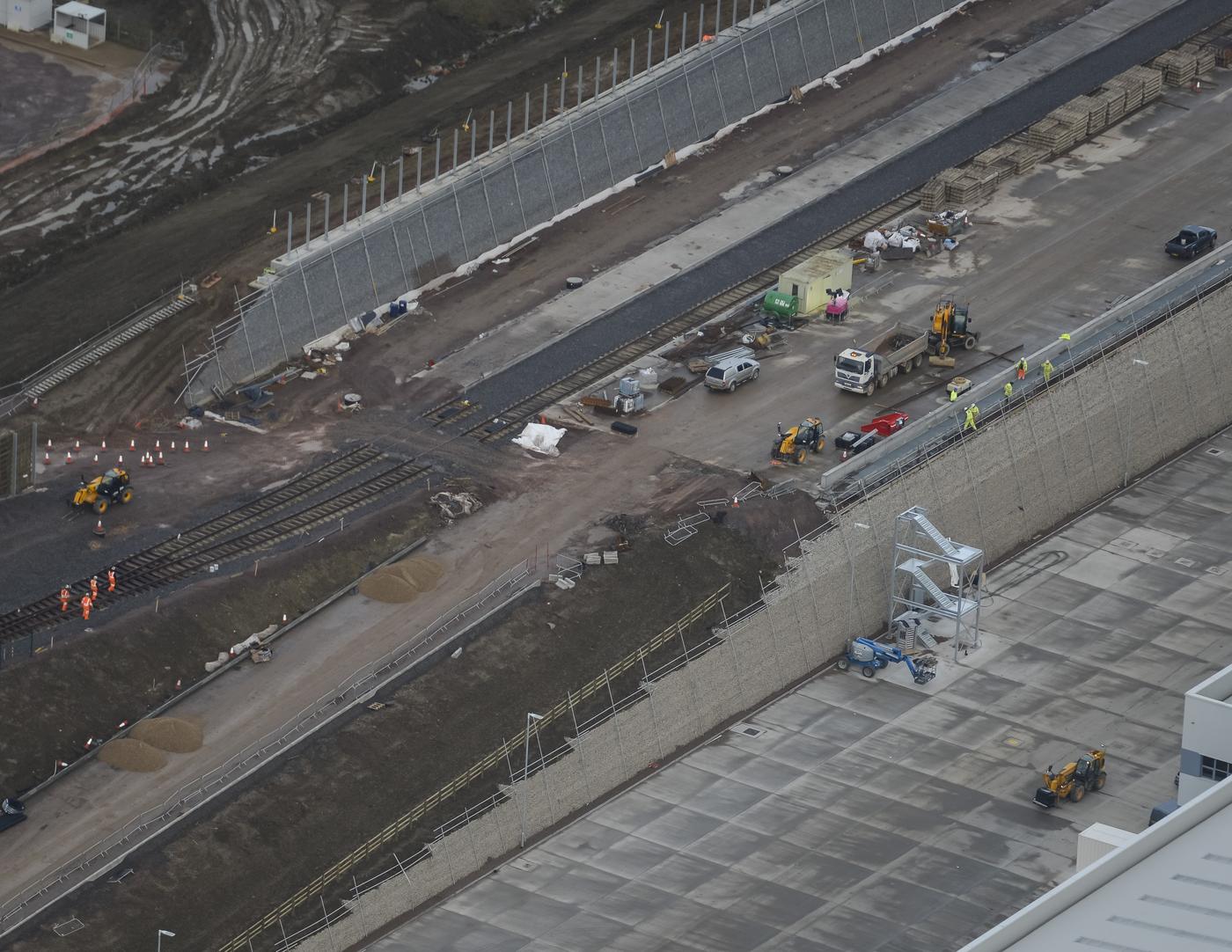 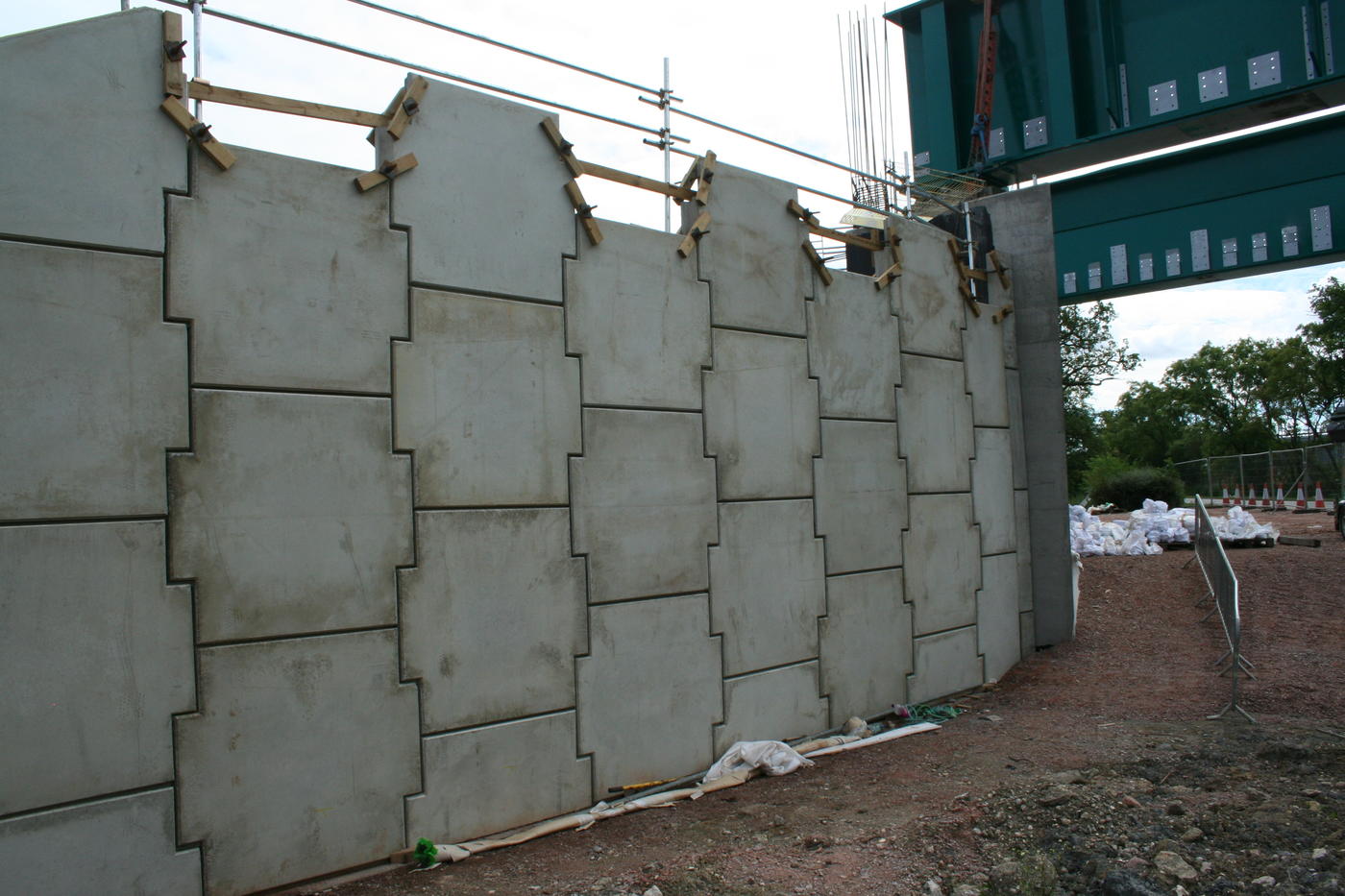 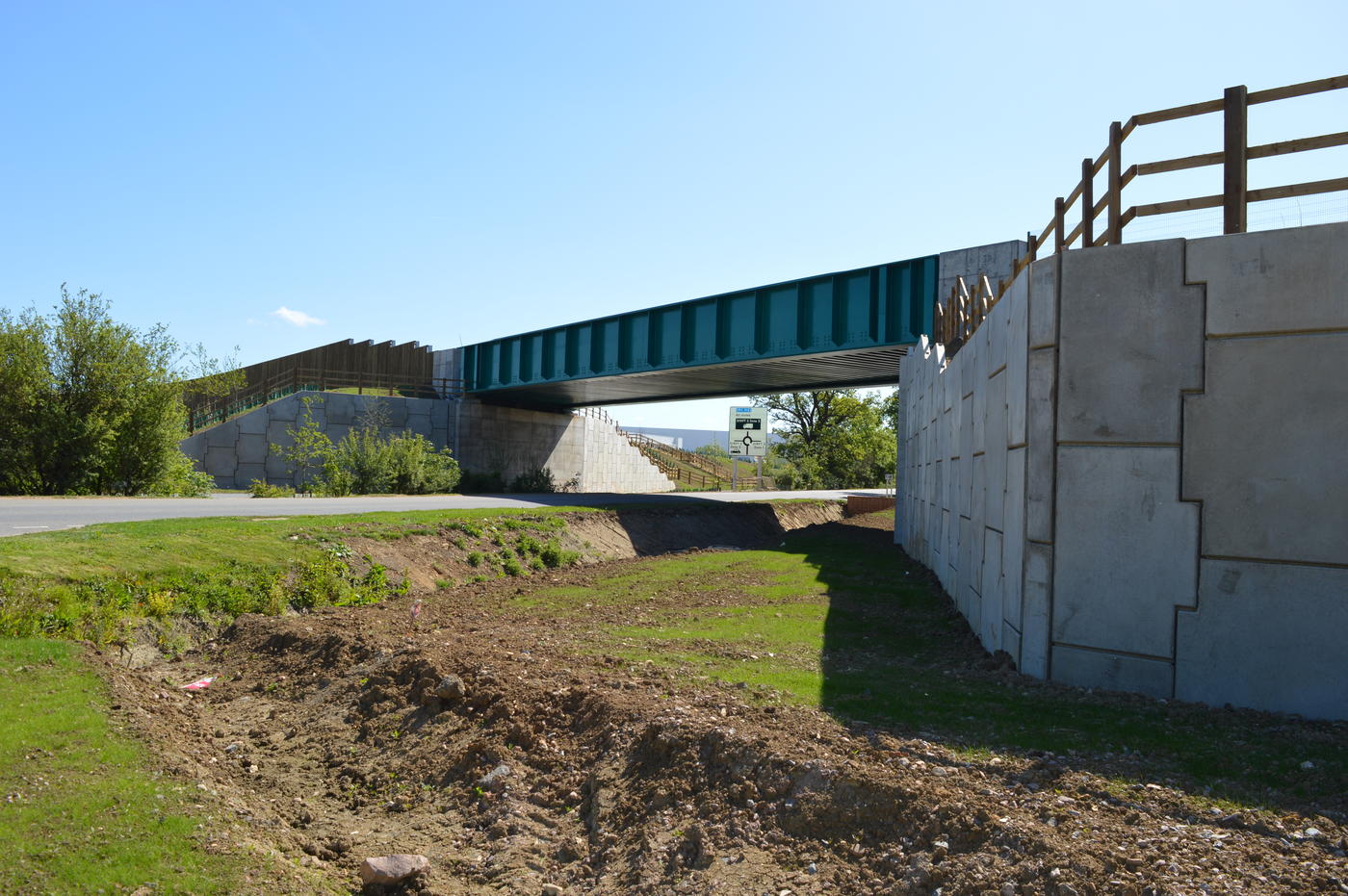 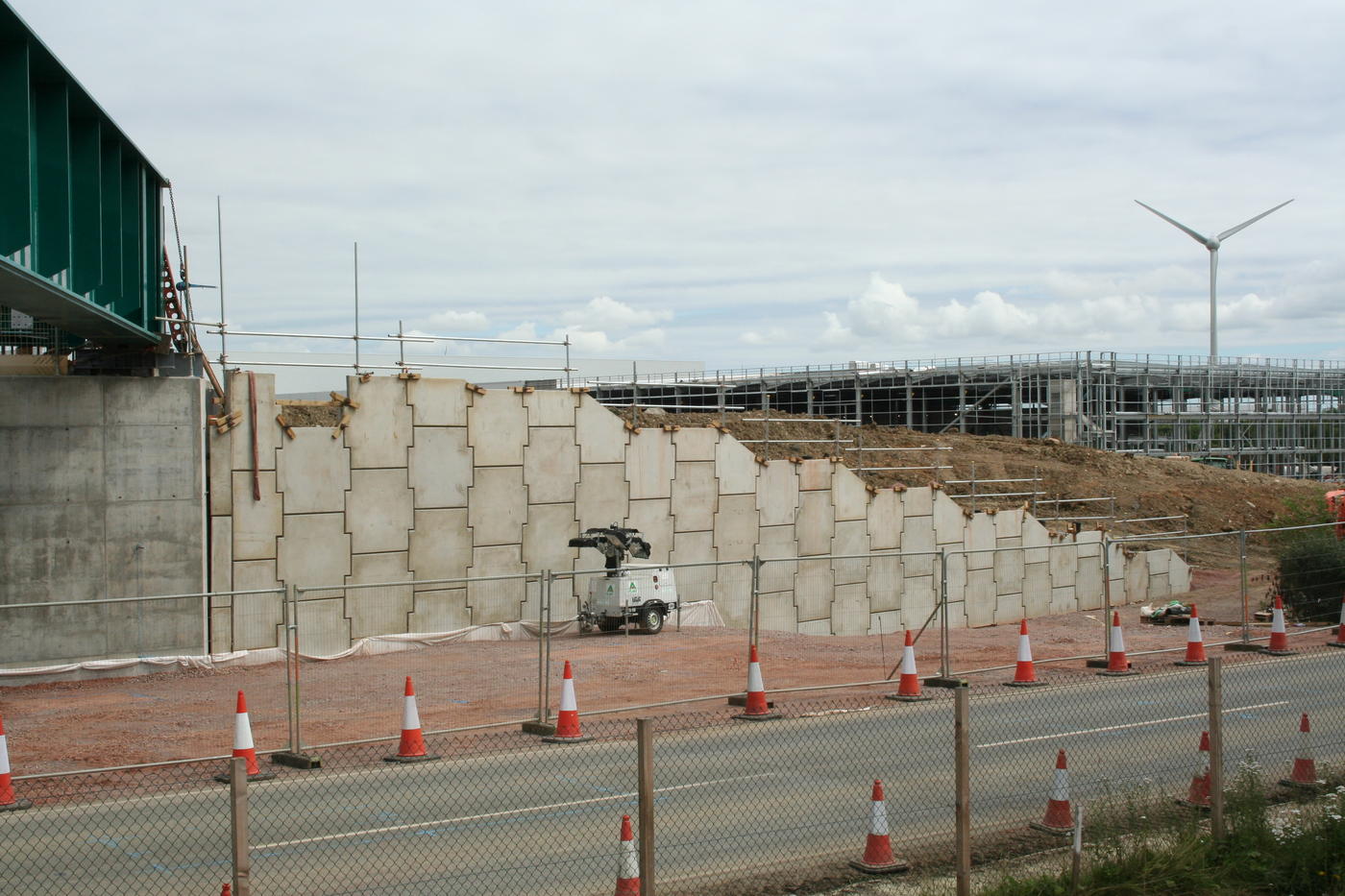 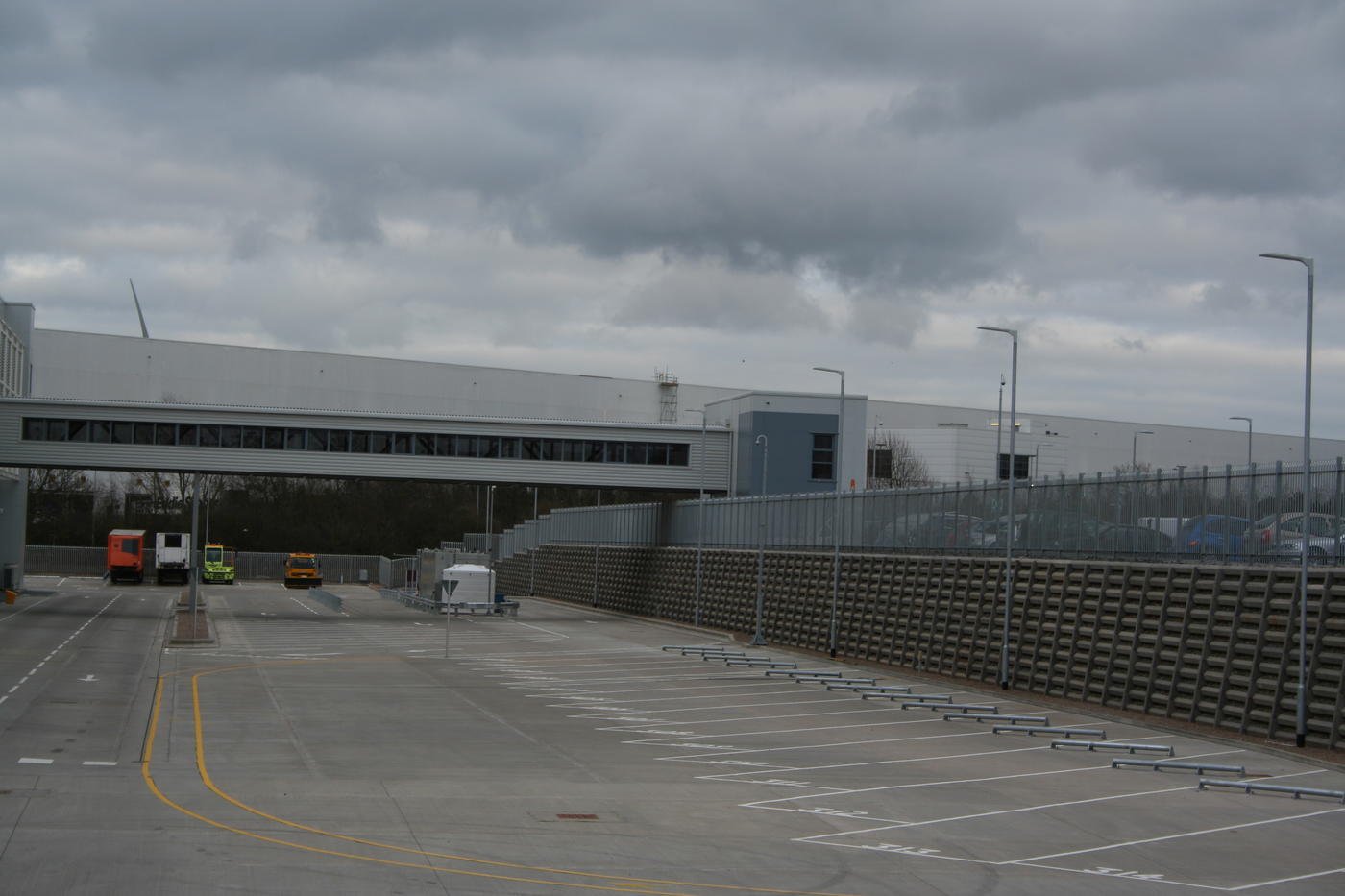 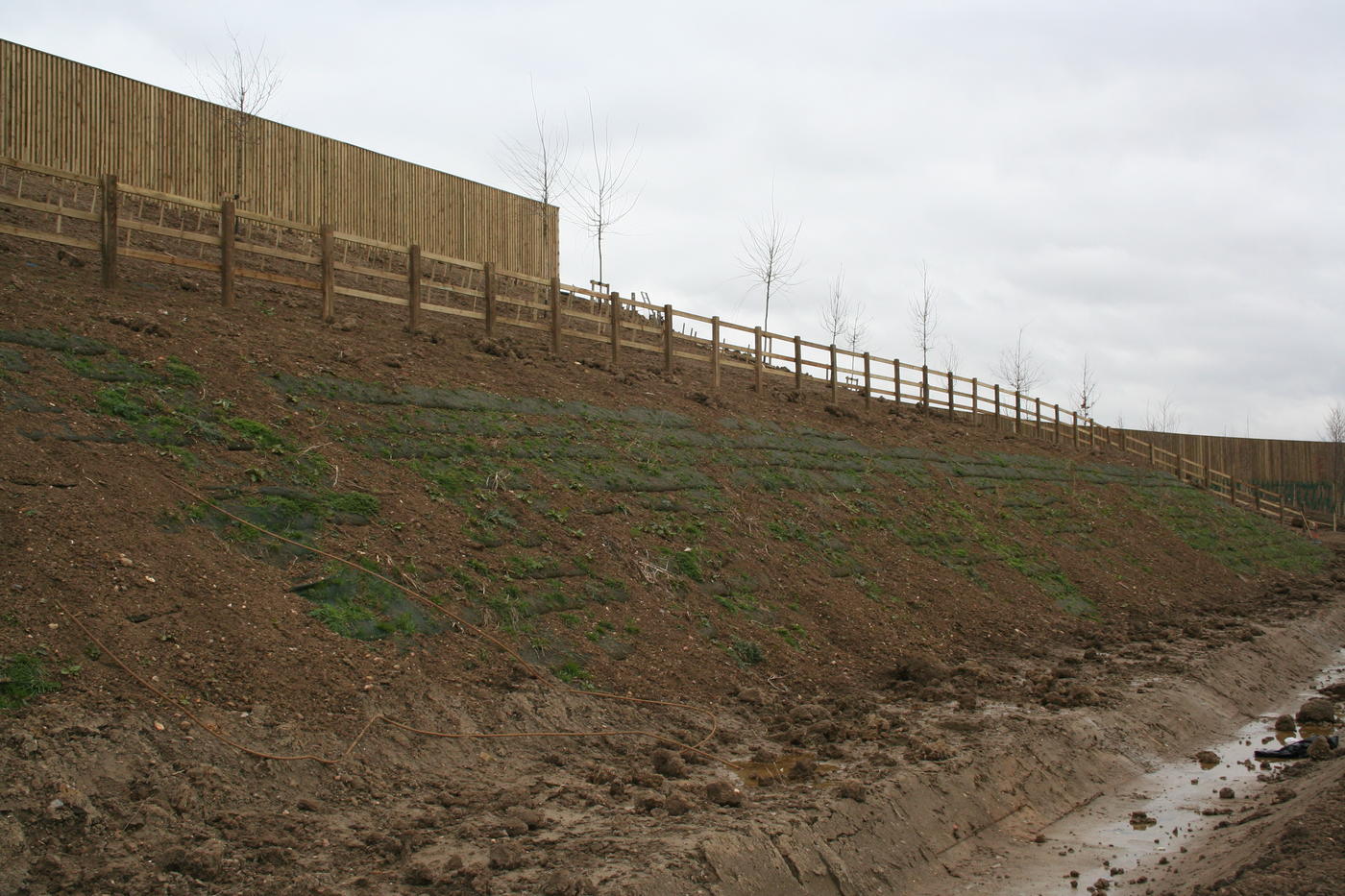 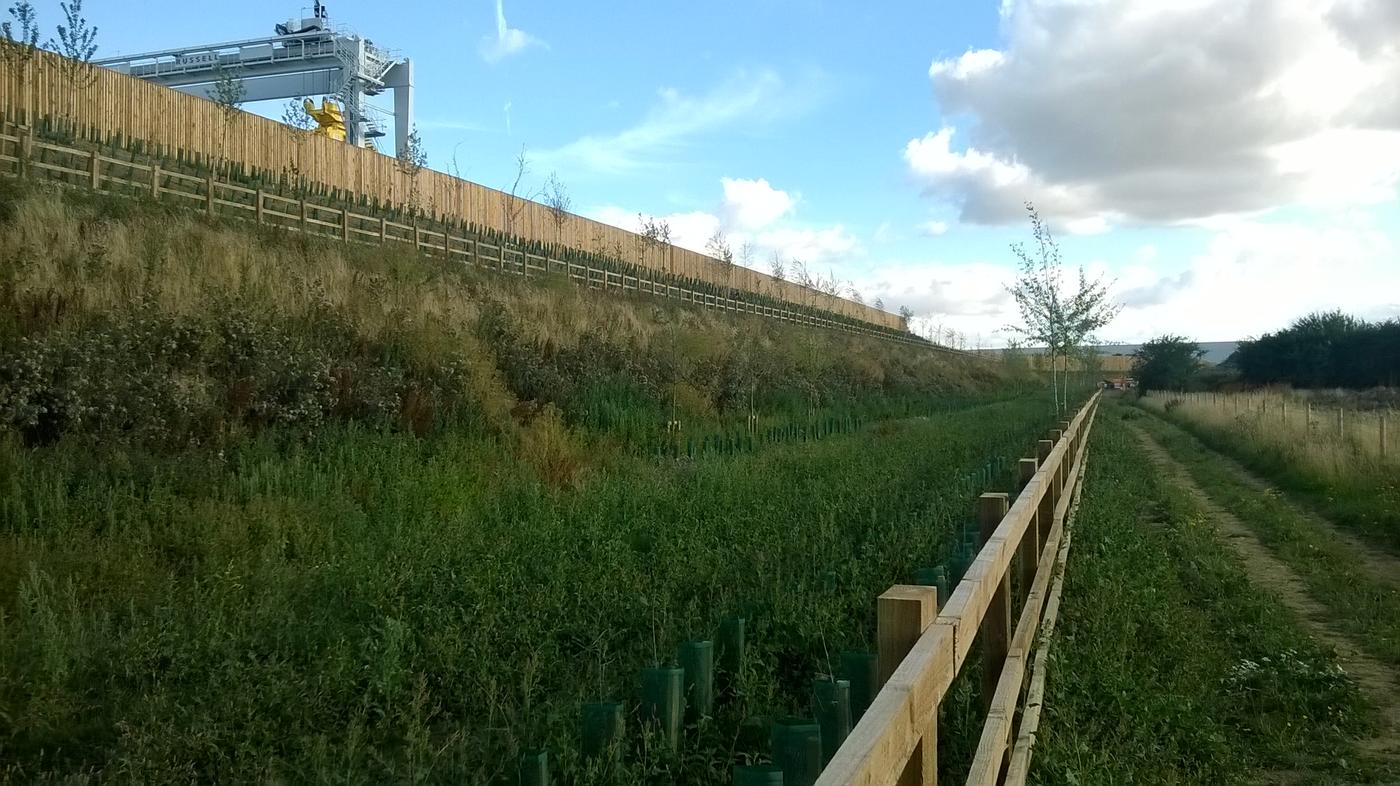