When the old Vauxhall Cars factory site in Luton became available for purchase, Redrow Homes were successful in securing this large parcel of prime development land. Their office in London and Basildon are sharing the development, with Redrow London construction apartment block and Redrow South East building traditional homes. This large sloping site would require extensive retaining walls and would also pose some interesting geotechnical challenges. 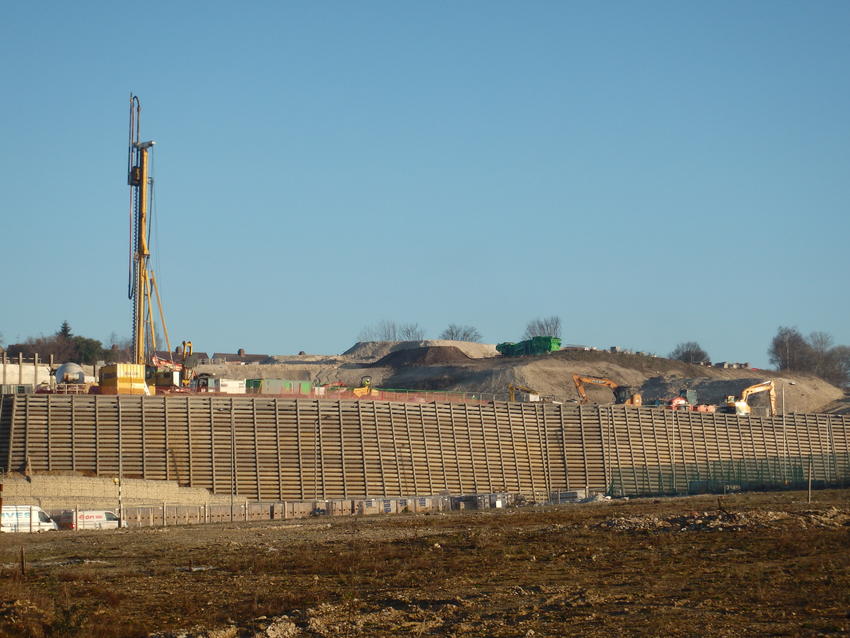 This project was a real joint effort between Phi Group and our colleagues from Keller, with several different foundation and retaining wall solutions being utilised. The site was split into two different sections, with Redrow London using the lower section and Redrow South East the top. Early involvement and collaboration with Redrow and their consultants certainly paid dividends when work on site commenced, with interactions between structures and buildings, and programming of works on site all looked at early on I the process.

Redrow London planned to build 4 apartment blocks,  up to 8 floors high, on the lower section of the site. Part of these works involved the design, supply and installation of a Textomur reinforced soil slope to create a terrace that would form the boundary between the two different sections of site. There was also a piled retaining wall and king post retaining wall required in this phase of works, which were installed by Keller.

This phase of work involved the construction traditional homes, and would also need extensive retaining wall works to deal with the change in levels as construction progressed. Again it was a total solution given with Phi Group installing an Andacrib concrete crib retaining wall and another Textomur reinforced soil slope, with Keller carrying out the necessary piling works and more king post retaining walls.

For Redrow to be able to place an order with one contractor to carry out all of these works was measurable from a risk, commercial and programming perspective.

The main challenge for this project was the sheer scale of the geotechnical works required to make the site ready for Redrow to build on. Phi Group and Keller became involved with Redrow and Barter Hill, their Engineers, from a very early stage to give advice on various solutions. As the scheme developed and changed, so did the geotechnical solutions that we could offer. On schemes such as this, early involvement is paramount and enables many issues that can arise on site to be addressed at an early stage.

There was a huge amount of excavation and re-modelling of the site, so minimising the muck away of material from site was also a key factor in choosing the appropriate solution. As Phi Group has a wide range of solutions to choose from, as the scheme developed we were able to give the most appropriate solution to meet the geotechnical specification and Redrow's requirements.

Phi Group proposed the use of their Textomur reinforced soil system, as levels were being raised on site to create a plateau that Redrow wanted to have a vegetated face. The ability to re-use the site won excavated chalk material to form the reinforced soil mass was a major factor in choosing this solution, both from an economic and environmental perspective. The use of site won material is not without it's issues, and aspects such as the weather and how this affects compaction of the material effectively need to be considered. A testing regime was devised with RSK to ensure the material was compacted correctly, with the newly compacted material having to be protected if adverse weather was forecast over night.

The Textomur wall was up to 9.0m high, 200m long and with a face area of nearly 1,500 square metres. The construction of the reinforced soil mass involved the placement and compaction of 9,000m3 of the site won chalk material, with additional material placed and compacted by Phi Group behind this also.

The Textomur wall also had to be designed to take the temporary loading from a 60 tonne piling rig that Keller were using directly above the slope to install piles for building foundations.

This phase of works was the larger of the two for Phi Group, which involved the design, supply and installation of the larges ever Andacrib concrete crib wall we have ever installed. The wall is nearly 400m long, up to 10.35m high and with a face area of 2,700m2. As you can see from the pictures it is an impressive structure. The Andacrib was chosen in this instance, as the area of site it is located in, over excavation to fit the necessary geogrid lengths at the base of the structure was not possible, so a gravity retaining wall system was proposed. The Andacrib wall is tough and durable with a 120 year design life and is very quick to construct. Planting bags were inserted into the front face so over time it will vegetate and the appearance will be softened.

Again, temporary piling loads were a factor so the design had to accommodate this. As you can see, for retained heights of this magnitude, double depth walling is required to give the structure mass required.

The second structure built on this phase, apart from the king post wall that Keller installed, was another Textomur reinforced soil slope. This one was 265m long with a face area of 1,375m2 and a maximum retained height of 7.20m.

Working closely with Redrow, RSK and the groundworker Natta, all meant that this was a highly successful project. 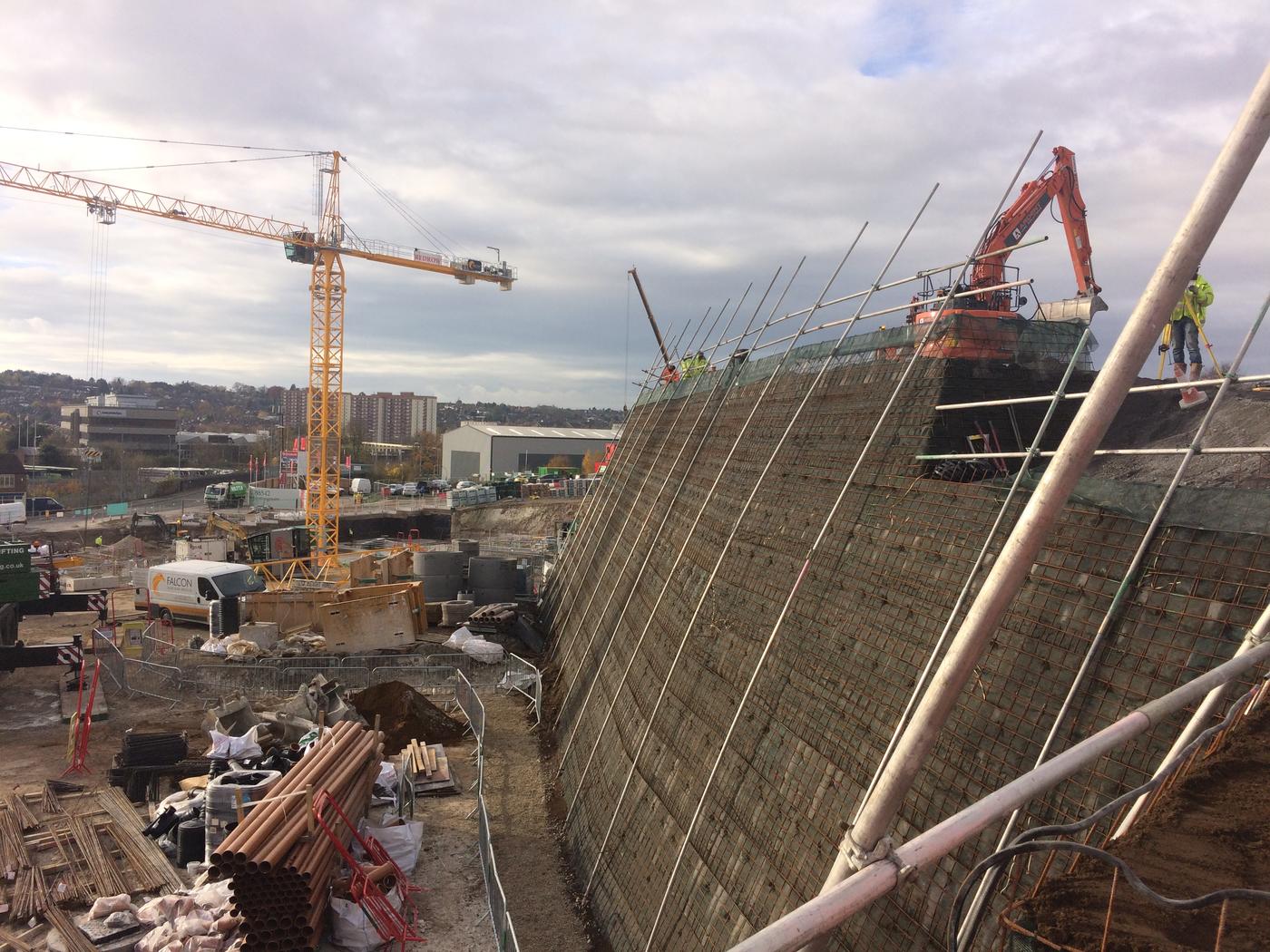 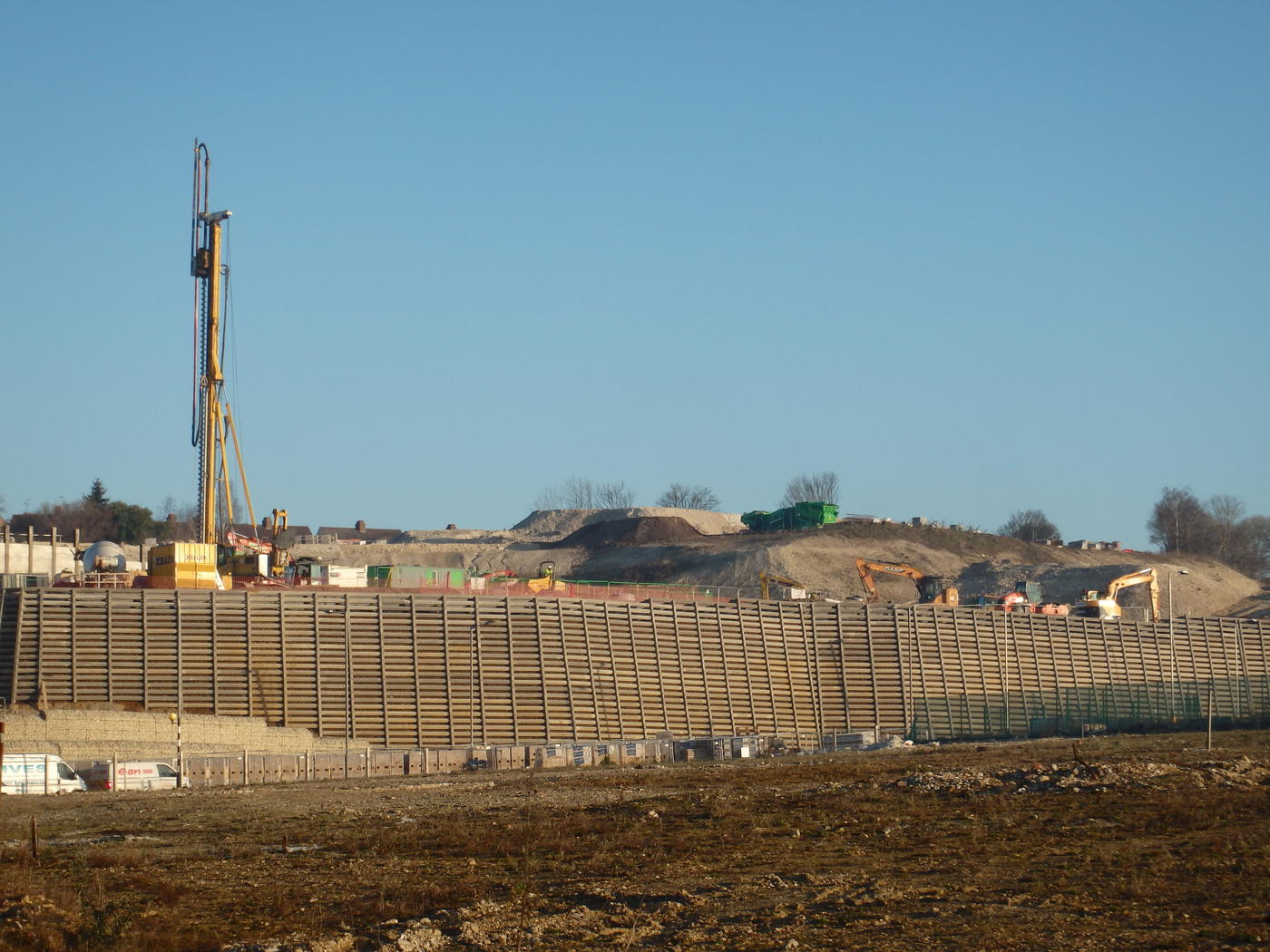 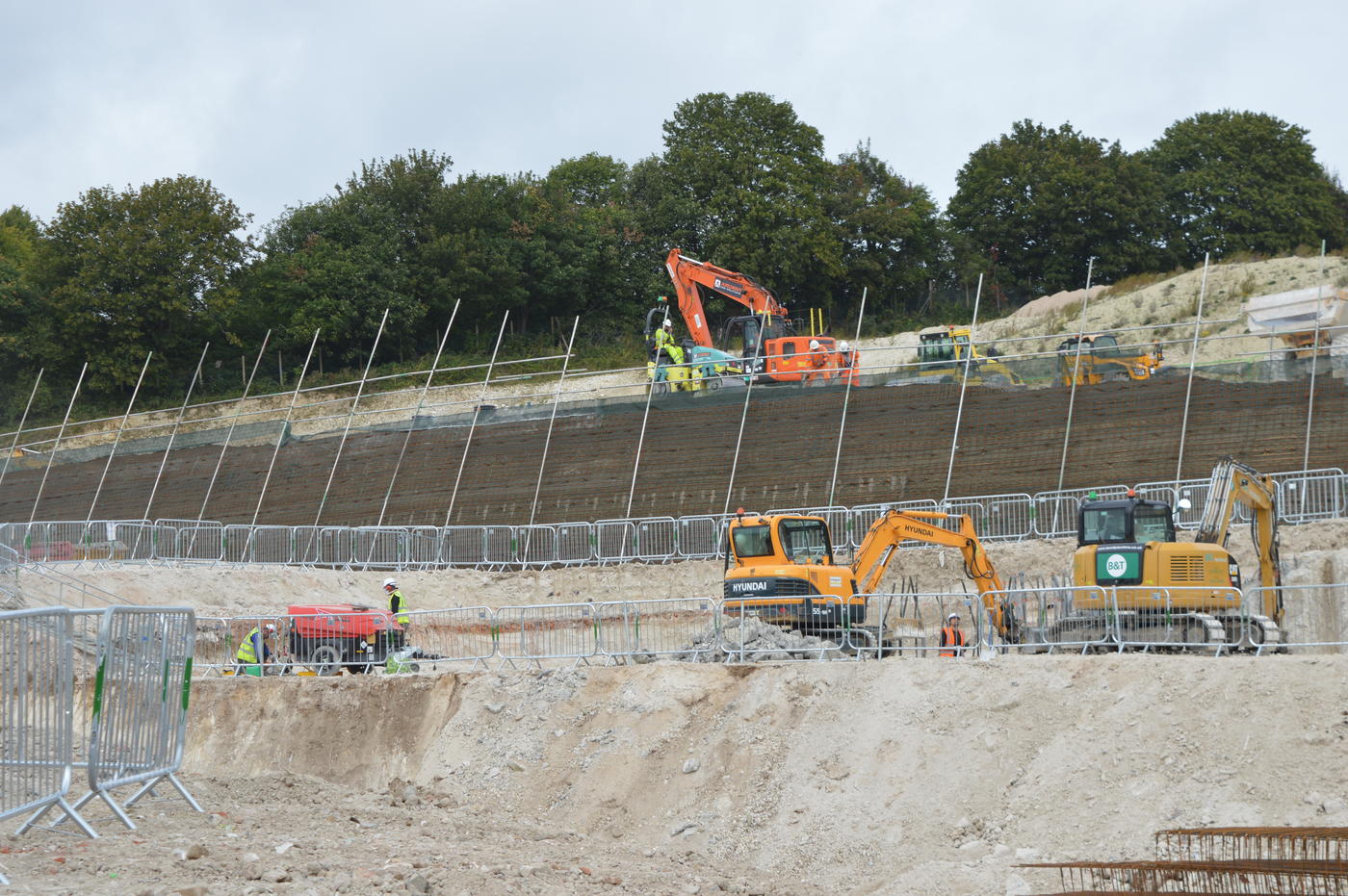 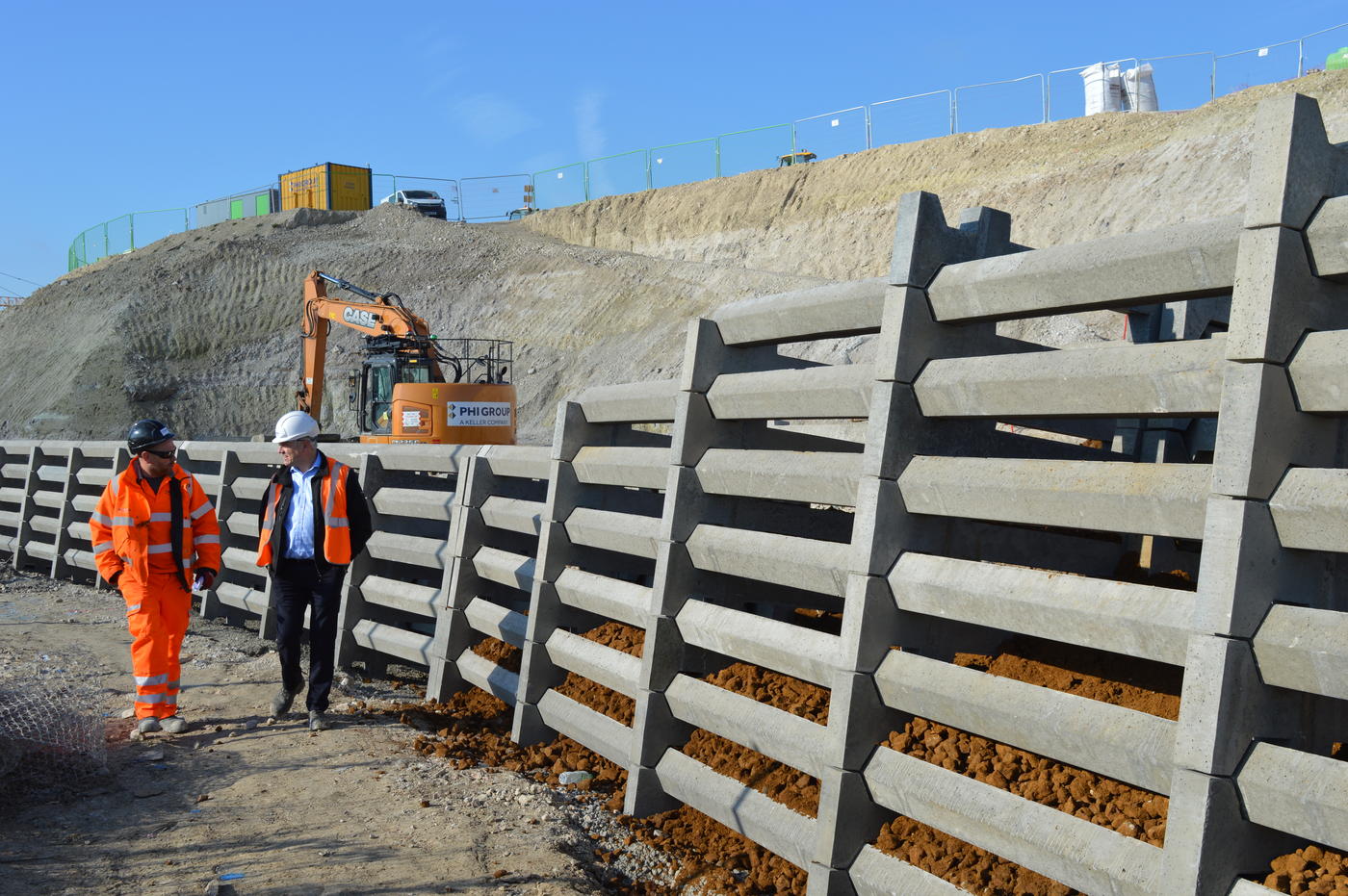 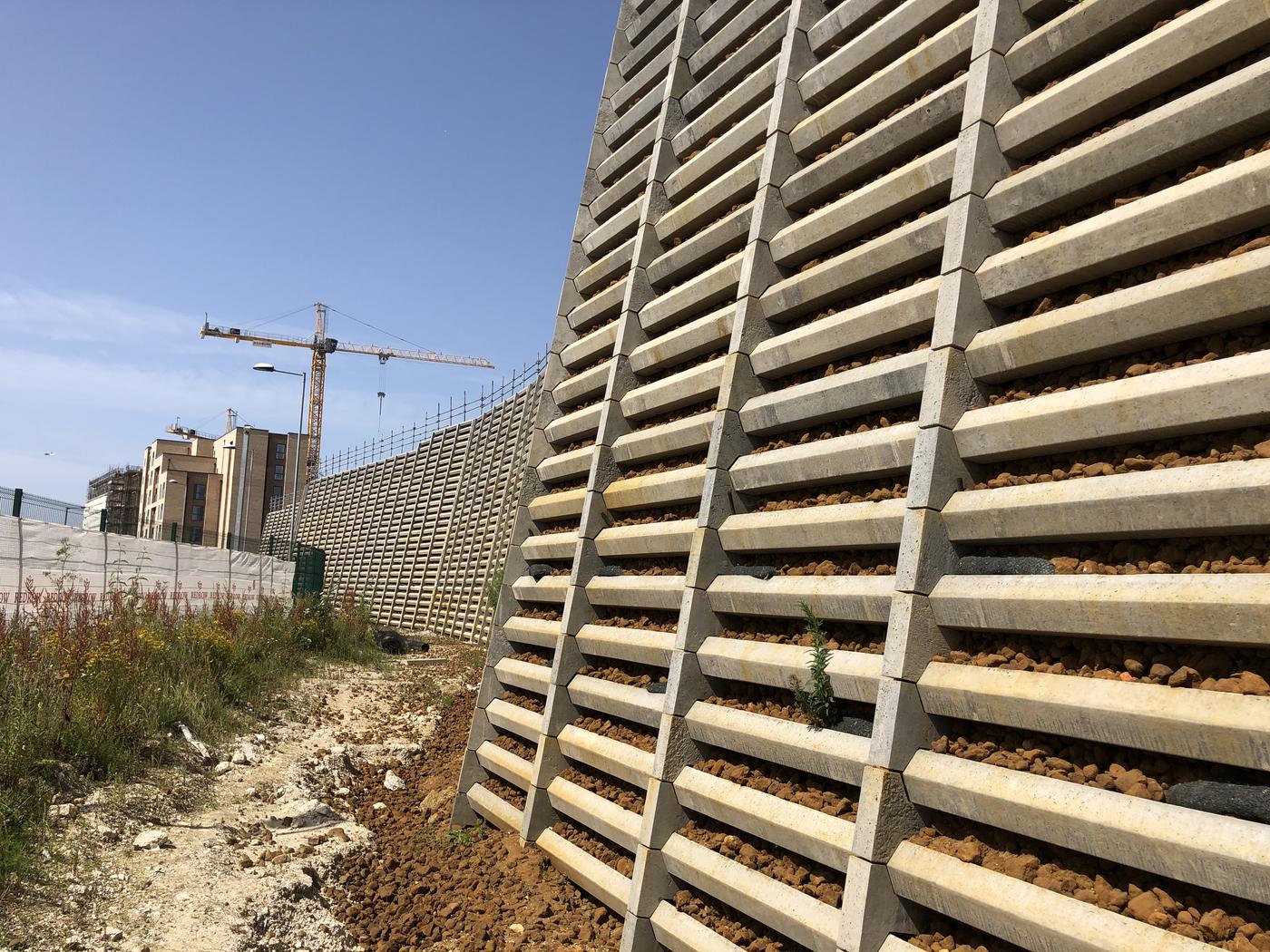 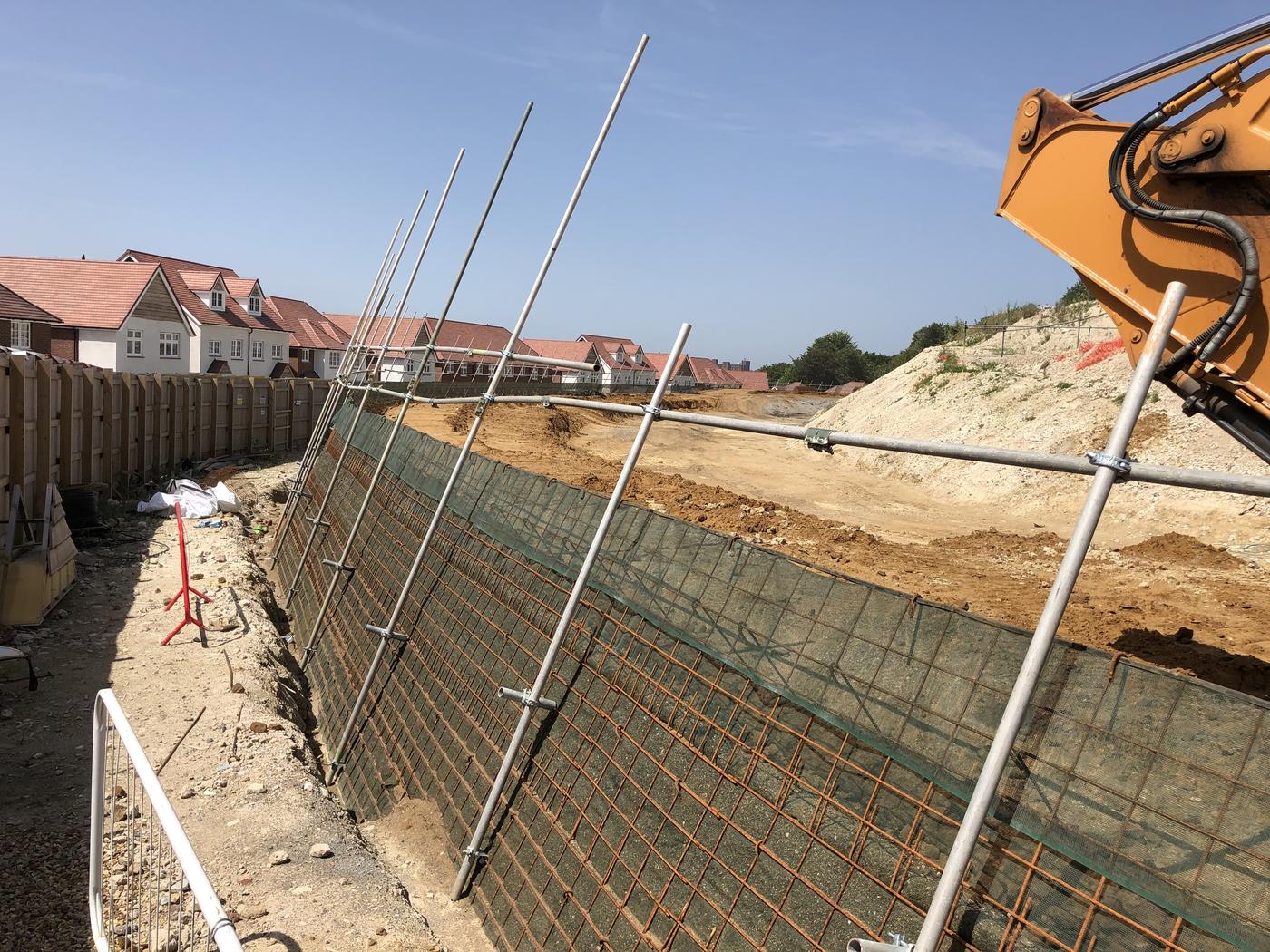 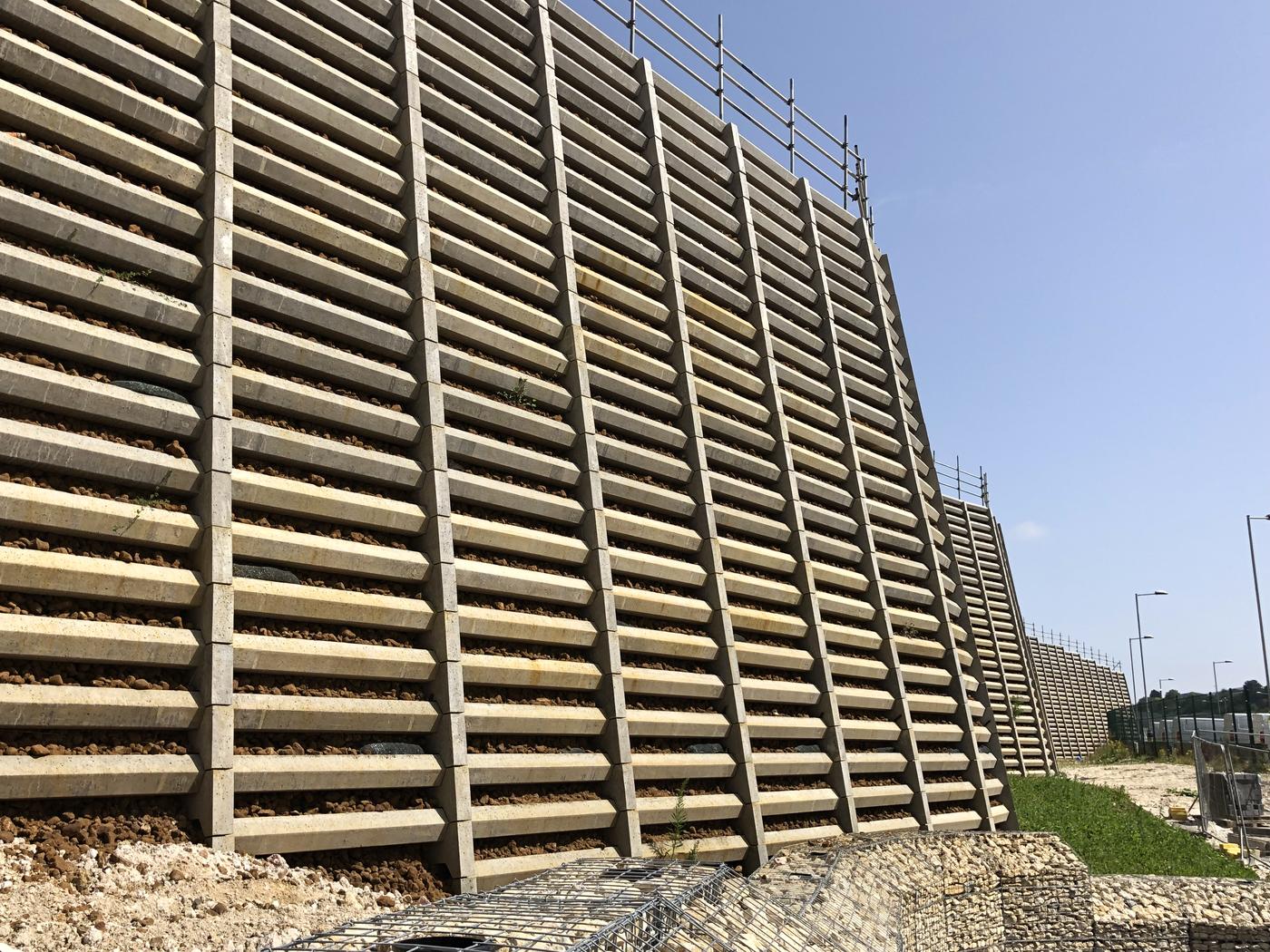 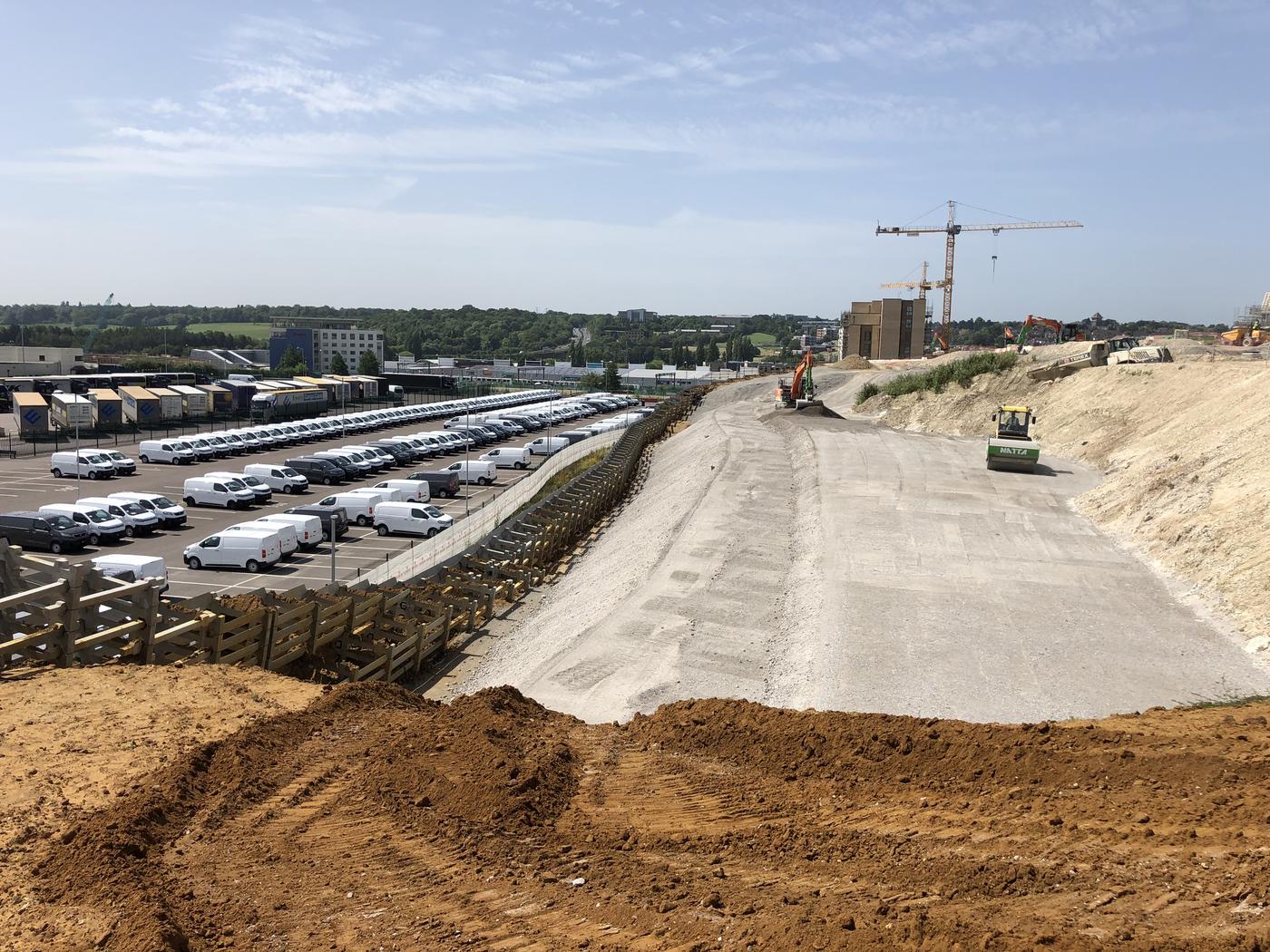 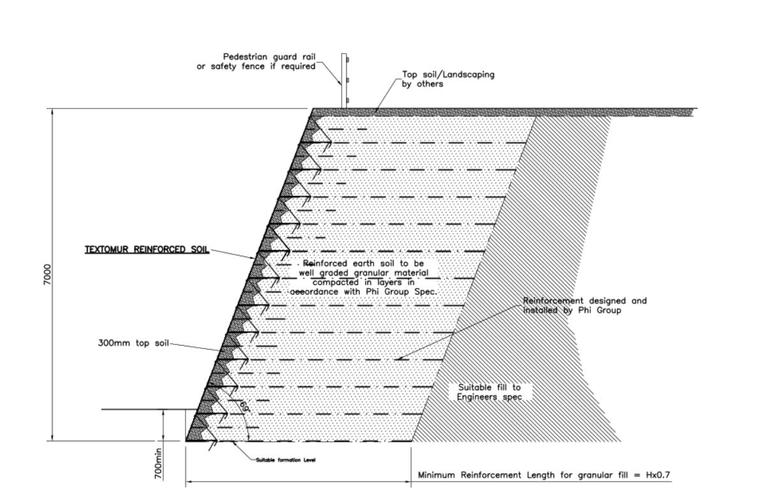 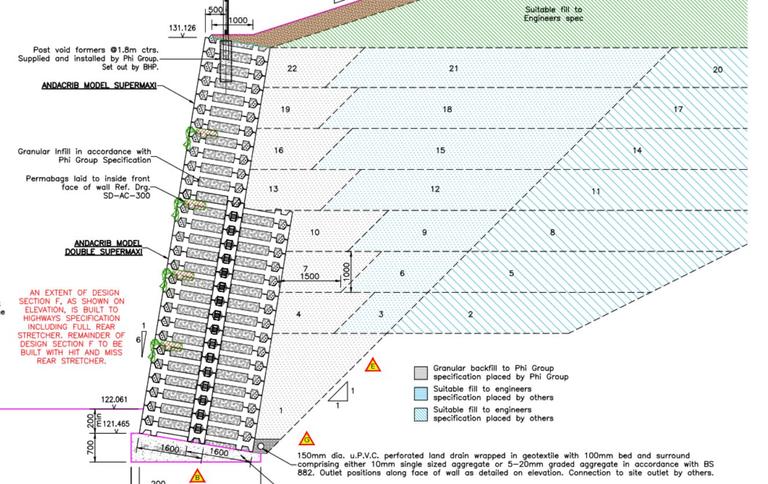